While there are many different kinds of spiders in Delaware and the neighboring states, there are two common kinds that can be found invading homes and businesses: the black widow spider and the wolf spider. These spiders share in common their eight legs, their diet which consists of mainly other insects, and their hunting mentality. 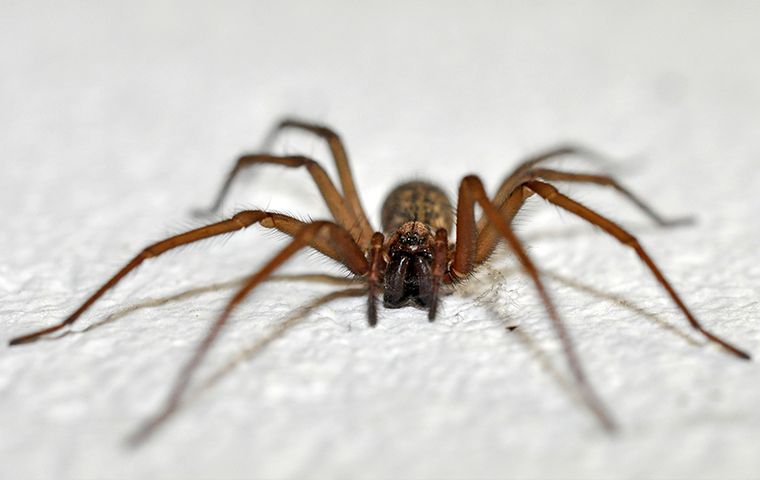 Adult wolf spiders can grow up 1 inch in size and can be distinguished by their dark brown coloring, cream or yellow colored stripes, and their six, uniquely arranged eyes that they use to spot and hunt their prey. These large spiders have eight long, spiny legs and bodies that are covered in hair.

Due to their large, hair-covered bodies and their ability to move around very quickly, wolf spiders appear much more intimidating than they actually are. However, despite their unnerving appearance, these spiders actually pose little to no threat to humans.

Black widow spiders, on the other hand, are much more dangerous than wolf spiders. In fact, these venomous spiders are extremely harmful to humans and should be avoided at all costs. If you are bitten by a black widow, you may experience the following symptoms:

Seek medical attention as soon as possible if you believe that you’ve been bitten by a black widow spider.

Why do I have spider problems?

Spiders usually invade homes because they were drawn there by the insects they hunt and feed on. Since spiders feed primarily on insects, you most likely have a number of other pest problems as well. Once inside, spiders will search for hiding places and emerge to hunt at night.

Where are spiders commonly found?

Black widow spiders can be found hiding in dark, sheltered areas such as around fallen branches, in wood piles, and in piles or rocks.

Wolf spiders often create their nests in underground burrows; these spiders are also commonly found in and around garden areas.

Once inside, black widow spiders will be drawn to dark, secluded areas of the home with high moisture levels such as basements, crawlspaces, and around air conditioning units. Wolf spiders are most commonly found invading garages, sheds, and other secluded areas where they can actively hunt down their prey.

How do I get rid of spiders?

The best way to deal with spiders around your home is to call the spider exterminators at Green Pest Management. Our technicians have been trained to deal with a variety of pests, including spiders. They know where to find them and how to efficiently exclude them from your home. The last thing you want in your home is potentially dangerous spiders, so don’t hesitate to call our pest control professionals. We’ll work diligently to find a solution that works for you and your property.

How can I prevent spiders in the future?

Dealing with spiders on your own is never recommended due to the health risks discussed above. Green Pest Management offers quick and reliable spider removal services that allow you to stay safe while we take care of the issue.

Reach out to us today to learn more about our spider control options!

How Spiders Get Into Homes In The Northeast